In my last post I talked about setting up a VPN tunnel to my home network using Wireguard, but did you know that Wireguard also makes for a good IPv6-in-IPv4 tunnel?

This setup involves a VM from Linode as well as some IPv6 address blocks assigned from them. If you're interested is replicating this setup, you'll have to open a support ticket with them to request both a /116 block, and a /64 block which gets routed to your VM.

Here's a diagram of how all this will fit together (click the image for a larger view of it): 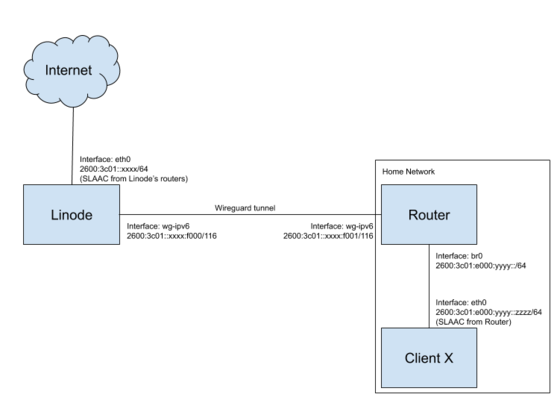 I've already previously talked over the basics of setting up Wireguard so I'm just going to skip straight to the configs.

/etc/wireguard/wg-ipv6.conf on the Linode VM:

For IPv6 addresses on each of the clients, I'm using radvd on the router to advertise itself as the router and hand out SLAAC addresses. Here's what /etc/radvd.conf looks like on the router:

And then, like with the last time, I enabled and started the systemd service units on each machine: