The other major half of the Intelligent Drink Dispenser project was the software side of things. As with the hardware, there were some things we had to consider when beginning the design of things.

We decided that since we only had a semester to get everything done, we needed a framework to take care of the more nitty-gritty stuff. We eventually decided to go with the Django web framework, which uses the Python programming language. Python is a language we all knew and Jon and I had used Django in the past. Also, since our 'final product' would be highly based on a client-server model, it makes sense to go with a web app since the server can be in a central location with many clients connecting to it.

The most important thing to us was the fact that Django abstracts the database into models for us. No having to mess around with raw SQL, we just run some queries and get our data from the models as if they're just plain ol' objects. After some thought, we came up with our models and their relationships: 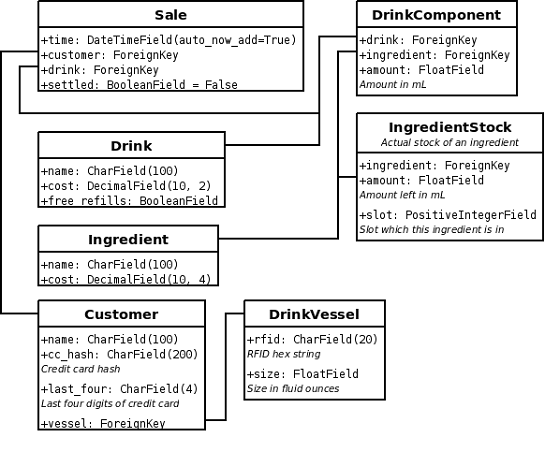 The development of the application was fairly straight-forward. It was just a standard Django app after all. The interesting part was interfacing with the hardware.

If you remember from my post talking about the hardware side, we used an FTDI UM232 USB-to-serial converter. Lucky for us, there's a Linux kernel module which represents this device as a virtual serial port, which made our jobs a whole lot easier since there's existing serial libraries for Python (like pyserial). We ended up just writing a couple of functions, one to read the RFID tag from the serial port, and one that takes in a Drink id and then communicates to the microcontroller to pour it. The microcontroller's fairly dumb, just taking a number and turning that pin on, or turning all of the pins off if a non-valid character is sent, as you can see in the pourDrink function:

Not exactly the most precise in terms of pouring accuracy, but it gets the job done as a prototype. As for the rest of the code, there's not too much else that's very interesting. I may release the code at some point in the future.