I said that I'd post details on my Intelligent Drink Dispenser project "soon". That was over a month ago. Whoops. I blame my new internship for that.

For those of you not in the know, the Intelligent Drink Dispenser was my senior design project at Missouri University of Science and Technology (which will forever in my heart be University of Missouri-Rolla). It's basically a smart drink dispenser that's capable of mixing, charging customers, telling the bar/restaurant owner when they need to refill the machine, etc.

If you don't feel like reading the details and just want to look at the pretty pictures, you can check out my Picasa album or watch the Youtube video.

The theoretical process is that the customer would go to order a drink, and since they're a new customer, they'd have to be entered into the system by the person running the machine (bartender, or waiting staff). They would have their name and credit card information taken, and would then be assigned a drinking vessel based on the first drink they were wanting to order. Multiple vessels could also be assigned to the same person. Once the customer is setup and is ready to purchase their drink, they set the fluid vessel on the marked reader area on the dispenser. The system then recognizes the vessel, who it belongs to, asks the customer for the last four digits of their credit card, and then asks the customer which drink they'd like to order. The customer then chooses what drink they'd like to have, the system double-checks that the vessel is the right size, and pours it.

Security and privacy was one of the major goals of the project. The only information stored about the user is their name, a secure hash of their credit card number, the last four digits of ther card, and their drink order history.

The project itself can pretty much be split into two major components: hardware and software. I would probably say the hardware is more interesting and posed more challenges for us. The first thing is how the heck do you pour the fluid? If you take into consideration that we only had a $300 budget for the whole shebang, it's not an easy task. The way that the professionals do it is with Carbon Dioxide-powered pumps, which are controlled by electronic valves and supplied by a tank and pressure regulator. Three pumps, valves, and the feed system would cost us well over $300. Our original idea was to use 24 VDC sprinkler valves, but that idea failed because the sprinkler valves by their nature require back-pressure to operate. We came up with the idea of using windshield washer pumps made for cars. Since this was supposed to be a prototype, we didn't have to worry about our components being food-grade. That, coupled with the fact that the pumps operate on 12V DC and are relatively inexpensive ($15-25 a pop), that's what we went with for our design.

The rest of the hardware design was fairly straightfoward. We used an 8051 microcontroller to control everything, an FTDI UM232 to handle the PC communications and a Parallax RFID reader to read the tags that are on the bottom of the drinking vessels. The serial communication is pretty interesting since the USB-to-serial device has only one serial port but two devices to talk to (the RFID reader, and the PC). Our solution was to have the receive line go to the RFID reader (to the PC), and have the transmit line go to the 8051 (from the PC). This meant that our 8051 couldn't talk back, so we had to hope that things were working right. Additionally, Richard developed a simple serial language for the 8051. If the 8051 received an ASCII 0 through 7, it would turn on that pin on the port we were using. This could easily be modified to operate with all the ports on the 8051 to control 24 pumps, or even with some addressing logic to control a huge number of pumps.

Below is our hardware schematic, which should give you some idea of how it's all connected. 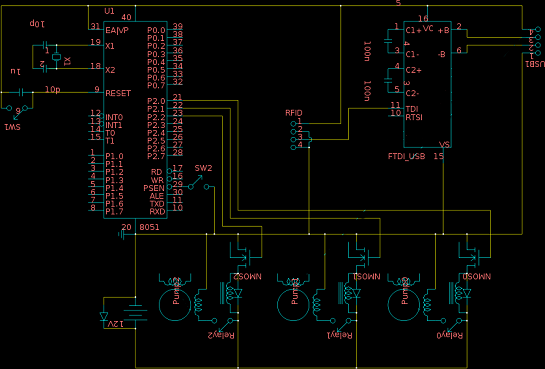 In my next post, I'll be talking about the software design. Stay tuned!